The History of Tellaia: The Fall of the Auromian Empire and the Coming of the Prophet


It was the custom of the gold dragon emperors to retire upon reaching a certain age, and to become an adviser to the next Emperor. Dragons increase in strength and potency as they age, but the weight of years catches up with them in the end, crippling them physically and mentally. But the final Golden Emperor delayed his retirement. He had led the Auromian Empire through great challenges in his life, while his children had known only peace and did not have his experience. And so he remained on the throne, and did not notice the onset of senility.

As enemies gathered on the borders, led by the evil dragon broods, the Golden Emperor saw treason within his own brood. He turned on his own family, destroying them. At the same time, he became obsessed with erecting a series of megaliths around the world. The Emperor abandoned day-to-day administration to focus on this task. As the situation deteriorated, rebellions broke out throughout the provinces. The massive cost of the megaliths, alongside internal and external wars, broke the Empire's economy. The outer provinces were abandoned to the evil dragons and their armies, and the Empire fell back to Tirenia.

Crescentia, to the east of Tirenia, was one of the lands which was abandoned by the Auromian Empire. Its people were constantly threatened by orcs and goblins, as well as the the threat of evil dragons. In one village, a girl called Yeesha began to manifest great magical powers, which she used to protect her people. She went to study with the dwarves, who recognized her magic as being the divine magic of the angels. Very few humans had been able to use such power, and even among the dwarves her gifts were prodigious. Once Yeesha completed her training, she began to gather followers about her, and to teach them what she had learned. She went among the warlords who had rebelled against the Auromian Empire, and became their leader.

Yeesha marched upon Auromia, where she confronted the Golden Emperor. Exactly what transpired is unknown: some say that she slew the insane tyrant; others that she healed him of his madness and that he perished after realising what he had done, the last of the gold dragons. She then united humanity against the raiders and dragons threatening them all. By now, Yeesha was hailed as Propheta and Salvatrice, and some of her followers believed that she was the Almighty One manifested on earth to save them. This was heretical to the dwarves who had taught her. A faction of dwarves betrayed her to the dragons, who publicly tortured her to death. However, during the final battle between humans and dragons, Yeesha returned, in an ascended spiritual form, and used her divine magic to summon forth angels from heaven to win the battle. 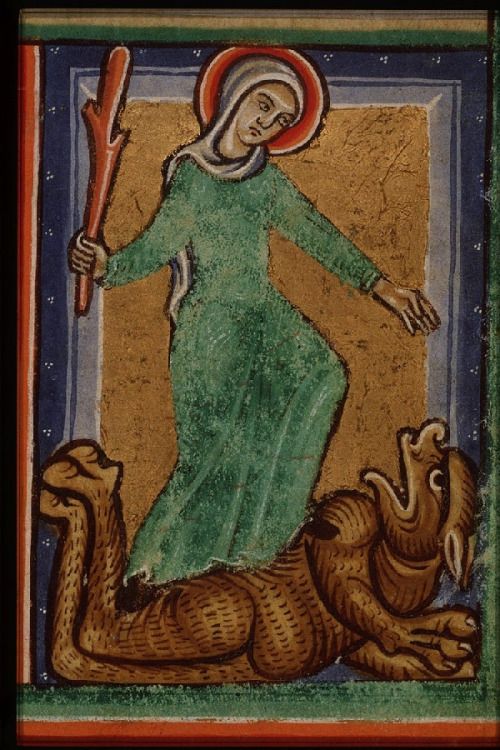 Art: 'Saint Juliana of Nicomedia.' From the Bible of Saint Bertin in Saint-Omer, c. 1195.
History