July 26, 2019
Sir Terry Pratchett's Discworld books are set in a fantastic flat world that flies through space supported on four elephants that stand on the back of a giant space turtle. They are parodies of fantasy literature and the real world, and are recommended reading for anyone with any interest in fantasy as a genre.

For a Dragon Princes campaign, Pratchett's books set in Ankh-Morpork are particularly relevant. They are without equal at showing how a fantasy metropolis might function, warts and all. The city (a mix of renaissance Prague, Victorian London and modern-day New York) has a filthy vitality and character all of its own. Pratchett's characters are exceptional and worth adapting for any roleplaying world. Furthermore, a major theme in many of Pratchett's later books is how the world reacts to technological and cultural developments like the printing press, a modern police force, multiculturalism, and more. This should also be a theme in any Dragon Princes game.

The most relevant books are the City Watch books (Guards! Guards!, Men At Arms, Feet Of Clay, Jingo, The Fifth Elephant, Night Watch, Thud, and Snuff), the Moist von Lipwig books (Going Postal, Making Money and Raising Steam), and The Truth. However, all of the books are well worth reading. 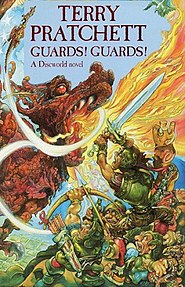