I've always envisaged all the games I run in Tirenia as having one connected storyline. Things that happen in one game have consequences in another. The death of Rubina in The Company of the Wolf led to the madness of Morignus in Carnevale, and the rebellion that followed on from there caused the unstable political situation that I'm beginning to explore in the Fiumenze Nights games. (If I could just get those games finished...) Fra Salvatore from The Company of the Wolf is due to show up again in the Camarma game, when that happens, and the magical surge in Carnevale is the same one that triggered all the madness that's currently happening in The Ruins of Auromia.

As all of this is going on, I've had the sense for some time that Tirenia is on the brink of a period of immense upheaval. As more campaigns occur, I get more of a sense of where they might be going. It's very hard to actually pin down what's going to happen, because I deliberately leave so much of it up to the players. I had no idea that Morignus would be the final villain of Carnevale when that campaign started, and I still don't know what the results will be of Camarma, Death of an Artist and especially The Ruins of Auromia, except that they're sure to shake the metaplot around them - Auromia especially!

But that said, here's my current sketch of how I foresee the first 'phase' of the Tirenian Wars occurring. Campaigns in Bold have already occurred, or are in the process of happening!

1016 A.S
Winter: Carnevale campaign. The lunar convergence occurs. There is a revolution in Vanzenia, and Gianetta becomes principessa. This is the beginning of the Tirenian Wars.
Spring: Ruins of Auromia campaign. A new power arises in Auromia - though which one of three remains to be seen! Meanwhile, Padovia is conqured by the red dragons.
Summer: Fiumenze Nights campaign.
Autumn: Silver Dragon Campaign. The precarious balance of power in the north is disrupted.

1017 A.S.
Winter: Camarma One-Off. The Church attempts to crush the rogue preacher Fra Salvatore.
Spring: Bronze Dragon Campaign. The bronze dragons turn on themselves as a new power enters Northern Tirenia.
Summer: Green Dragon Campaign. A green dragon makes a deal for power as war erupts in Northern Tirenia.
Autumn: The first phase of the Tirenian Wars draws to a climax as the major factions confront one another.

After this, there's too many variables to make any definite predictions about what happens next! I know the following things may happen:
- One city in Northern Tirenia invents hand-held guns, and attempts to gain independence from the dragons.
- Chiara di Benicio will return to Tirenia from her pilgrimage.
- The Great Death will return, and its true nature will become apparent.
- La Salvatrice may or may not return, and the Revelations may or may not occur. 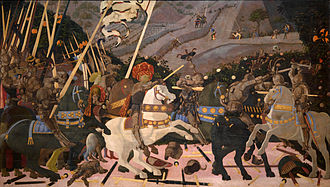